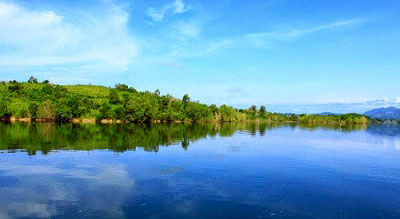 Without a doubt, Riam Kanan Lake sounds quite familiar to those who live in South Kalimantan. The locals recognize the lake as the site prime of the natural hydroelectric power plant, which is called Prince Mochamad Noor Reservoir. Aside from that, the lake is popular among tourists especially due to its beauty and serenity. Usually, people come to the site during weekends to relax and enjoy a recreation with families. Some of them also take advantage of the visit to take good pictures of the site! So, where is the location? It belongs to Aranio Sub-District and resides in Tiwingan Baru Village.

The Nuance
As mentioned before, the nuance is peaceful there. Even the surface of the water looks quite calm and hypnotizing! It has the color of Pine green, which looks soothing. As for the features, the lake has both the reservoir and a small port (Tiwingan Baru). These are, somehow, worth a visit as well. Not to mention the site offers a pristine and clean environment, which is suitable for relaxation. The lake is surrounded by hills and several villages reside near to this location. In a nutshell, it is a nice place to get away from daunting daily routines and to find inspiration.

Exploring Riam Kanan Lake
Once arriving at the lake, tourists can do anything they like. For example, it is as simple as sightseeing. Not only the lake looks great, the lake shows a unique activity done by villagers. Sometimes, several locals come to the lake to catch fishes using a net. This, somehow, becomes an interesting object for photography! Plus, tourists are able to approach those people and join the activity. It is fun and meaningful indeed.

For those who love fishing, Riam Kanan Lake becomes a good place to do so. In this case, make sure to carry a fishing rod to the site. This can be done either at the sides of the lake or on the boat! It is because tourists can rent a “kelotok” (traditional boat) to get around the lake. It also helps tourist to get to a better spot for fishing, in fact. It doesn’t have to be fishing, actually. Even sightseeing is quite satisfying when exploring the lake by boat.

Another recommended activity to do in Riam Kanan Lake is to lean the history of the site. Tourists can get the information either from the locals or tour guides, actually. It is said the lake was formed by drowning two villages! Moreover, this was done intentionally by the government. Due to such event, the local settlement split to 13 villages that scatter around the lake.

How to Get There
It takes about 45 minutes to get to Riam Kanan Lake if tourists come from Martapura City. First, they need to reach Aranio Sub-District. Later, they can take any local transportation service and head to Tiwingan Baru Village. The lake is located quite near to that village, so it takes no time to get there later.