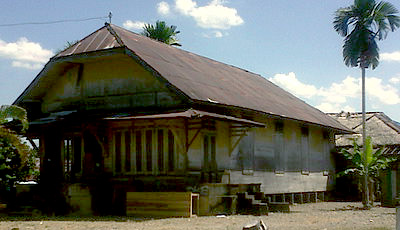 Banjar Regency belongs to South Kalimantan Province and it has become a new interesting tourist destination these days. What is the reason? People are attracted to the local culture and numerous types of traditional houses of the region, actually. One of the most famous ones is called Gajah Manyusu Traditional House. In a nutshell, it is the collective name of Banjar local houses, featuring a prime building with a stump shield roof. Not only the house becomes a unique object for sightseeing, it also becomes a wonderful object for photography!

The Nuance
It is true that Gajah Manyusu Traditional House has distinct characteristics as compared to others. For instance, it comes with a pyramid-shaped mansard roof in the front part of the house. The other sides feature different types of roofs, though, which are Sindang Langit and Pisang Sasikat. The house also features stairs, so that people can get to the house easily. In terms of materials, it only features traditional materials like woods and bamboos. In the yard, tourists may find dry grasses as well. In terms of nuance, it feels peaceful as villagers are rarely seen outside the house.

Exploring Gajah Manyusu Traditional House
For tourists, Gajah Manyusu Traditional House provides many benefits to them. For example, it gives valuable information regarding the history. It is said only the mainline lineage of Sultan Banjar were allowed to stay in this house. Simply said, it was the house of the future kings! No wonder, the house emits an elegant aura and looks different than others. The local government even applies the design to some of the government buildings in Banjar Regency, in fact.

Aside from learning the history of the house, tourists are allowed to explore and witness the structure directly. Gajah Manyusu features several rooms, after all. First, tourists may encounter Surambi Sambutan or an open space or terrace. The next room is called Pamedangan or Palatar. It is half open and half closed, actually. Next, there is Paluaran or the living room. The room is wide, so visitors would feel comfortable inside. They can rest for a while here if they want, before continuing the exploration.

What is next? After reaching the living room, tourists may find Palidangan or Ambin Dalam (located between the left and right Anjung). The last room to explore is none other than Padapuran or kitchen (pantry). In a nutshell, it has a similar structure and composition to regular houses. One thing that makes it different is indeed its design and historical value.

How to Get There
For those coming from Martapura City, they can simply head to local villages and see Gajah Manyusu Traditional House right away. The nearby village is located about 6.8 km from Martapura, actually. That means it takes about 25 minutes to get there. Make sure to take Melati Street, though.