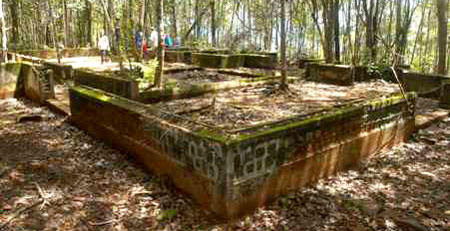 For those coming to Banjar Regency, they must not miss an opportunity to visit a recommended natural attraction called Mandiangin Fort. It is part of Sultan Adam Forest Park and it resides in Karang Intan Sub-District. As the name suggests, the fort belongs to Mandiangin Village. So, what makes the fort popular? In a nutshell, it has a historical value and has become an interesting location for an exploration. Some tourists also often come to the location to conduct photography, actually. As long as they come with a local guide, they are able to explore the site comfortably and efficiently.

The Nuance
Mandiangin Fort is located in the top of Besar Hill and it resides in the midst of a shady forest. That means tourists need to conduct trekking to get to the location. The route is winding and steep! Not to mention it features steep cliff on its both sides. Have no worries. The scenery is quite impressive and the environment is pristine. That means this effort won’t be a waste at all. Once arriving at the site, tourists may directly see such historical structure. The fort looks so old and it is buried underground covered by weeds and grasses.

Exploring Mandiangin Fort
The first allure of Madiangin Fort is related to the landscape, which is both challenging and stunning. That means tourists can enjoy trekking when heading to the location. During the trip, people can see stunning views of Riam Dam and Mandiangin Mountain from afar. Not to mention they may encounter the Dutch Pond when heading to the fort! It has clear and refreshing water, so the pond is suitable for bathing. The source of the water comes from Besar Hill actually.

As for the tip, tourists should have hired a local guide beforehand. This person helps to show the route and explain the history of the site after all. Once arriving at Mandiangin Fort, the guide may tell tourists about some facts regarding the fort. It is said the fort was built by the Dutch during the World War II. In the past, the building was used as postage (during the colonial era). Here is the important person who realized the idea. Dr. Bauke Jan was the person who inaugurated the site in 1939! He was a governor back then.

Aside from being the guesthouse or postage, the fort also became the place where the Dutch Army monitored the presence of enemies. No wonder, it acted as a shelter as well. However, the fort was ruined over time due to old age and some natural disasters. Tourists can only see the reminiscences of it these days. That means the building looks imperfect despite its historical value.

How to Get There
The distance between Martapura City and Mandiangin Fort is 22.1 km. That means tourists may spend about 46 minutes to get to the location. This can even be faster if they take PM Noor Street. The first destination is Karang Intan Sub-District. Later, they need to reach Mandiangin Village and conduct trekking to the top of Besar Hill. The fort resides there, after all.