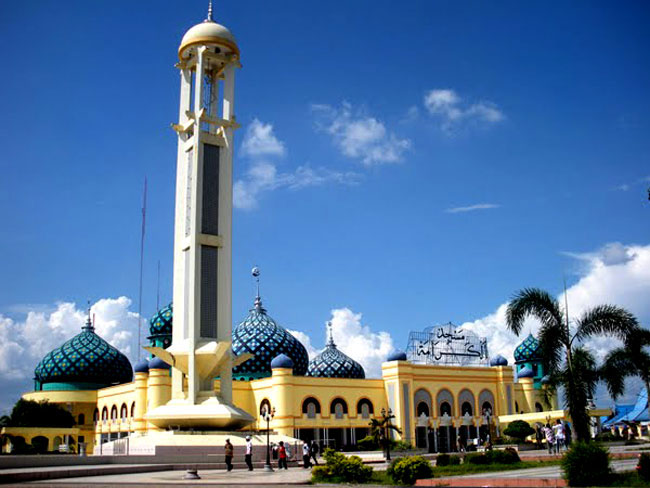 Several mosques have made Banjar Regency more interesting to visit. One of them is located in Pasayangan Village called Al-Karomah Grand Mosque. In terms of region, it belongs to Martapura City actually. The distance is quite near to Syamsudin Noor Airport, too. That means tourists can easily reach the site without hassles, regardless of the type of transportation service they are going to use. Here is an interesting fact. This building is claimed to be the biggest mosque in South Kalimantan Province! No wonder, it becomes a new tourist site for both the locals and outsiders. These people come to take pictures of the mosque and enjoy its magnificence.

The Nuance
It is easy to spot Al-Karomah Grand Mosque. Thanks to the strategic location. Not only it resides on the roadside, the mosque is located beside Banjar’s Regent Office. In terms of structure, it is similar to Demak Grand Mosque. Here is an important thing. The mosque has undergone several renovations over time. In the past, the name was Jami’ Martapura Mosque. It was made of ironwood and featured “limasan” roof. Today, the mosque looks more modern and beautiful. The domes have the color of parakeet green and the walls are dominated by beige color. The mosque even has a unique tower located in front of it.

Exploring Al-Karomah Grand Mosque
Tourists have different reasons why they visit Al-Karomah Grand Mosque. The first common reason is that they want to learn the history of the building. Have no worries. The keeper is quite friendly, so it is easy to acquire the information. According to the locals, the mosque was built in 1897. The main structure remains even though the mosque has undergone several renovations! Despite the old age, it looks well-maintained and sturdy indeed. Thanks to both local government and the keeper.

Visitors can also enjoy a soothing nuance inside the mosque, especially while worshipping. The most noticeable object that tourists can find in the building is none other than the pulpit. It is used by a religious leader to give his sermon, actually. Here is the interesting fact. The pulpit has been there for more than a century! So, it should be the best object for photography due to its historical value. The thing is that tourists should look for the right moment to take pictures of it. Disturbing worshippers is definitely prohibited.

As for the tip, it is recommended to visit Al-Karomah Grand Mosque at night. Not only tourists won’t disturb the worshippers (especially after Isya), the nuance of the building looks more stunning due to the sparkling lights of the lamps. The best spot to witness such scenery is at the iron bridge located beside Darusallam Islamic Boarding School.

How to Get There
It only takes 10 minutes to get to Al-Karomah Grand Mosque from Martapura City in Indonesia, as the distance is 2.7 km. The main route is Melati Street, actually. What tourists need to do is to head to Pasayangan Village and follow such route right away. It is as simple as that.