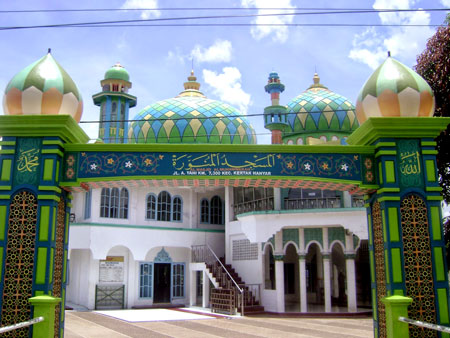 Some people overlook the fact that mosques have become a new vacation destination for passionate tourists. Well, visiting a regular and small mosque sounds boring right? In this case, tourists need to find great mosques to visit. For those visiting Banjar Regency, their choice should be Al-Munawwarah Grand Mosque. The location is in Guntungmanggis Village and it belongs to Landasan Ulin Sub-District. In a nutshell, the mosque becomes a worship place for Moslem. However, tourists often come to the mosque to conduct photography and sightseeing nowadays. That means the grand mosque can be an alternative when it comes to a vacation destination.

The Nuance
In terms of size, it is big and has a unique design. Approximately, the building has the total weight of 50x50 meters. Also, the mosque is built in an area of 3.1 hectares! Now, it’s time to talk about the design and architecture. At a glance, the building looks decent but magnificent. Thanks to excellent interior and exterior. In terms of color, it combines beige and green. Not to mention calligraphy beautifies its dome and some parts of the mosque. A tower also resides beside the building! No wonder, the mosque often becomes an object for photography.

Exploring Al-Munawwarah Grand Mosque
What can tourists do when visiting Al-Munawwarah Grand Mosque? Well, the first recommended thing to do is to learn the history of the building. It is said that the government spent about 33 trillion in order to build the mosque. The construction started in 2002 and it had been done gradually. So, from where tourists can get such information? They can either ask the keeper of the mosque or villagers who live near to the location.

It is amazing that the mosque can accommodate more than 5000 people! For those who want to witness a big number of congregations, they should come at the right time. Usually, the mosque becomes overcrowded during big Islamic Days. Moslems would gather in the mosque and worship together. As long as tourists don’t cause havoc on the site, they are allowed to take pictures and enjoy such moment. It is also important to take care of the environment, as the building is considered sacred or holy.

Another recommended activity that tourists can do in Al-Munawwarah Grand Mosque is photography. Both the interior and exterior of the mosque are quite impressive, after all. However, it is a little bit difficult to get the chance to take photos inside the mosque. It is due to the worship activity done by the locals regularly. As an alternative, can explore the exterior and take pictures of other objects especially the majestic tower!

How to Get There
From Martapura City (the capital of Banjar Regency) in Indonesia, tourists need to spend about 30 minutes to get to Al-Munawwarah Grand Mosque. The distance is 10.7 km after all. Once reaching Landasan Ulin Sub-District, their next destination is Guntungmanggis Village where the mosque resides. Have no worries. The trip would be faster if they take Ahmad Yani Street.