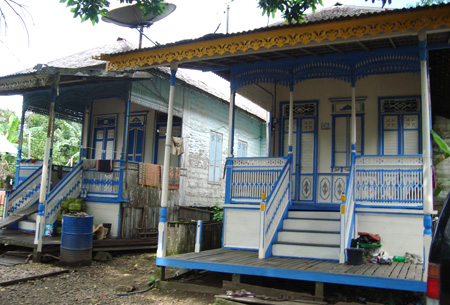 Some tourists, perhaps, have been aware of the variety of traditional houses that belong to Banjar Regency, Indonesia. Here is an example. The name is Ba’anjung Cacak Burung. The owner of this type of house is usually a farmer or common worker. Thus, the house represents the modest life of the locals, but it features interesting characteristics as well. This explains why tourists come to Banjar Regency and take some pictures of the house. They also enjoy witnessing the shape of the house directly, in fact. Here is the further information related to the house.

The Nuance
Despite the modest and traditional look, Cacak Burung Traditional House looks distinct. The prime room is elongated and features “Pelana” roof. It also features a pyramid-shaped roof that covers the entire rooms, though. The other rooms include two “anjungs”, Paluaran (living room), and Palidangan. One of the most noticeable characteristics is that the house represents the symbol of (+) positive sign. The locals believe that it may prevent any misfortunes that may happen to the residents in the future. In terms of materials, the house features mainly woods!

Exploring Cacak Burung Traditional House
The most common reason why tourists are interested in Cacak Burung Traditional House is due to the design and unique structures of the building. This explains why most tourists would carry a camera and take pictures of the house while exploring it. In the past, though, the house came with a rectangular and elongated design. As the time went by, it features more rooms on both sides so it applies symmetrical concept these days. These extra rooms are called “Anjung”, actually.

In terms of size, it has a similar width to Balai Bini House. Once tourists reach the terrace, they can also find 4 prime pillars that sustain the “Surambi”. These indeed look majestic and become a good background for selfies. When it comes to the roof, the terrace features Sindang Langit roof. Now, it is the time to enter the house. In the front wall, tourists may find Lawang Hadapan or the main door. It also features a window on both sides.

Inside, the rooms look spacious and decent. Even though tourists can enter the house freely, they must not cause troubles there. That means littering and causing havoc are quite prohibited. It is also recommended to come with a local guide to make sure everything runs well during the exploration.

How to Get There
The easiest way to witness and explore Cacak Burung Traditional House is by visiting Pasayangan Village. The distance is 6.8 km from Martapura City, Indonesia. That means the trip takes about 25 minutes to get to the village. As for the best route, it is Melati Street. Do not forget to hire a local guide before heading to the site, though.