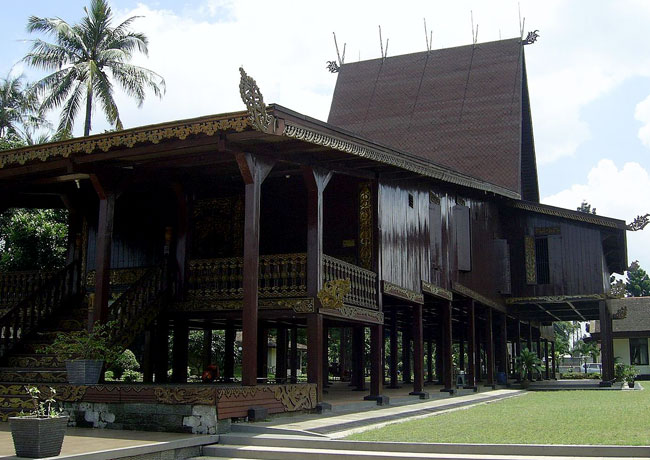 Here is the fact, most people who live in South Kalimantan Province belong to Banjar Tribe. No wonder, they have a significant effect on the culture of the region. Plus, they may attract tourists with several types of traditional houses! One of them is called Bubungan Tinggi from Indonesia, actually. This explains why many outsiders come to Banjar in order to learn the function, structure, and characteristics of this house. Not to mention they take advantage of the house as the background of photography. It’s fortunate that the owners of the houses may allow tourists to get in the house.

The Nuance
Usually, Bubungan Tinggi traditional house is built in an open field, surrounded by farms and plants. The owner of the house may build traditional clothesline in front of the house, as well. In terms of architecture, it has several characteristics. For example, the middle roof is tapering. It is called Sindang Langit roof. Moreover, the roof doesn’t come with a ceiling at all. In the terrace, tourists may find stairs with an odd number of steps. In Pamedangan room, visitors may see fences that come with Kandang Rasi carving.

Exploring Bubungan Tinggi Traditional House
In terms of structure, Bubungan Tinggi is similar to Betawi’s Bapang traditional house in Indonesia. One thing that makes it different is the scaffold characteristic (Rumah Panggung). No wonder, tourists may find several big poles that support the house. These poles are cylindrical, actually. Not to mention they are made of strong materials. Another noticeable characteristic is the presence of stairs located in front of the house. The residents and visitors need to use the stairs to get in the house, after all.

Once arriving at the site where Bubungan Tinggi traditional house resides, tourists can start exploring the structure. In a nutshell, the house has several parts. First, it is the elongated body (which is the main building). Next, there are rooms that stick on both sides of the building. The locals call them “Anjung”. When it comes to the roof, it has a tapering characteristic called Bubungan Tinggi. No wonder, people named the house that way. The roof elongates to the back of the house and this is called Hambin Awan.

Aside from exploring the structure and rooms of the house, tourists can gather information regarding the function and history of it. In the past, the house became the house of royals and important people. No wonder, it is considered more valuable and historical as compared to other traditional houses that tourists can find in Banjar. Thus, make sure to visit it someday.

How to Get There
The easiest way to witness Bubungan Tinggi traditional house is to visit nearby villages. From Martapura City in Indonesia, it takes about 30 minutes to reach the site. It can be faster if tourists take Melati Street, actually.