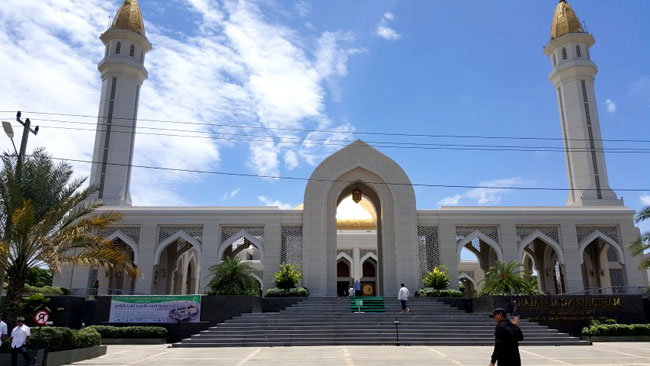 Tourists would get a new experience once they come to South Kalimantan Province in Indonesia. Why is that? Many natural attractions, culture, and historical sites reside there. Plus, it becomes the home of several grand mosques including Al-Falaq. The location is in Simpang Empat Sub-District and it belongs to Tanah Bumbu Regency. To be exact, it resides in Batu Licin City. The building is new and it was inaugurated by Hatta Ali in 2016. It is true the purpose is to accommodate the locals (especially Moslem). In other words, it becomes the prime worship place for those who live in Batu Licin. However, these days, some tourists come to the mosque in order to witness its majestic structure as well.

The Nuance
In terms of size, Al-Falah Mosque is definitely big. It applies the Middle-East architecture style and includes several interior concepts of South Kalimantan. The mosque was built on an area of 1.6 hectares, actually. It also has a width parking area, accommodating about 100 cars and 150 motorcycles. The mosque has the base color of white. The dome and top of the two towers have a golden color, though. Inside, tourists would be astonished by granite walls!

Exploring Al-Falah Grand Mosque
So, what can tourists do in Al-Falah Grand Mosque Indonesia? The most important thing is that tourists should not disturb the worshipping process. It is a holy place, so everyone should respect it well. Plus, it is important to retain the cleanliness of the mosque. That means littering is not allowed! Once arriving at the gate, tourists may find the main entrance of the mosque. The good thing is that the building has two floors and it is accessible for everyone.

For tourists, it is recommended to explore the exterior of the mosque only. Taking pictures is allowed as long as visitors do not cause havoc on the site. Fortunately, lots of interesting objects are available for tourists to capture including the main building and ponds (located on the sides of the mosque). The sound of gurgling water of these ponds is quite relaxing, as well. As for the tip, tourists should come besides the worship times. This way, they won’t disturb worshippers when exploring the mosque.

Most tourists are Moslems, for sure. Not only they want to witness the great design of the mosque, but they can also conduct praying with other congregations. The nuance of the mosque makes it comfortable to do so, after all. Thanks to the good management. The building is quite clean and well-maintained.

How to Get There
For those coming from Martapura City in Indonesia, they need to spend about 5 hours to get to Tanah Bumbu Regency. The distance is 199 km, after all. Next, they need to reach Simpang Empat Sub-District, where the grand mosque resides. As for the best route, it is Transmigrasi Street. Actually, there is no need to hire a local guide as the mosque is easy to find.