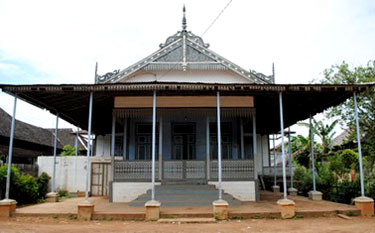 Not all tourists recognize the charm of traditional houses of Banjar Regency. Well, it is because they do not have ample information regarding the houses. In this case, they must at least know Palimbangan Traditional House. It has a unique characteristic and history, as compared to other traditional houses of Banjar actually. Tourists can easily find it in Haur Gading Sub-District, so they need to get there first either to learn the history or take pictures of the house. Here is the basic information. Palimbangan House is a variety of Banjar local houses, which was inhabited by religious leaders back then.

The Nuance
Like other traditional houses of Banjar Regency, Palimbangan features mostly woods. However, it owns unique characteristics including Tawing Layar roof. Unlike others, it doesn’t feature any Anjung at all. In the terrace, tourists may see Sidang Langit (lessenaarsdak) roof as well. In terms of function, the house is meant for famous people including great merchants and religious leaders. At a glance, it is similar to Balai Kaki Traditional House but it comes with bigger spaces. There are also stairs in front of the main door, actually.

Exploring Palimbangan Traditional House
Tourists would be astonished once they see Palimbangan House directly. It is because the house offers more interesting characteristics as compared to others (especially its roof and ornaments). In Peluaran Room, tourists can see a distinct roof that comes with kites or “layang-layang” ornaments on top of it. Not to mention it features Sindang Langit roof on the Surambi, elongating to both sides. Thus, it creates Jurai, which appears astonishing. What are other characteristics, though?

Before discussing other features of the house, it is better to explore the rooms. First, tourists may see Palatar Sambutan or the terrace. Next, there is Serambi or Pamedangan. Inside, tourists would reach the living room, which is called Paluaran or Ambin Sayup. What is next? There is Ambin Dalam or Palidangan located between the right and left Anjung. Another room is Padu or Padapuran, which is the kitchen or pantry. In terms of size, these rooms are moderate though.

For those who love photography, they are allowed to take pictures of Palimbangan Traditional House for sure. All parts of the house are worth a photo shoot, including the Tawing Layar, Balai Kaki roof, Sindang Langit roof, Lawang Hadapan (the door), Kandang Rasi (the porch), etc. The only consideration is that tourists should avoid littering and making too much noise inside. At least, they need to give respect to the house and the owners.

How to Get There
The distance between Martapura City and Haur Gading Sub-District is 155 km. That means the trip may take around 3 hours and 45 minutes to get to the site. As for the faster trip, tourists can take Ahmad Yani Street and use a better vehicle to get to the location. The trip becomes more efficient if they take advantage of a local guide, actually.