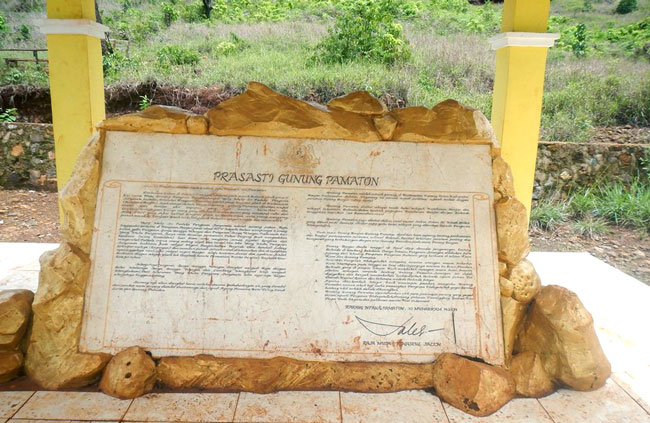 Not many outsiders have heard about Pamaton Mountain (Gunung Pamaton). Well, they should look information regarding such vacation destination immediately. The location is in Kiram Village and it belongs to Karang Intan Sub-District, South Kalimantan Province in Indonesia. In a nutshell, the mountain is famous for its challenging landscape and a historical site where Pamataon Inscription resides! The fact is that the inscription has become the landmark or icon of the mountain. It was inaugurated by Pangeran Muda of Banjar Sultanate back then. During the colonial era (the reign of the Dutch), the site became the base of local warriors as well.

The Nuance
What is Pamaton Inscription about? Overall, it is a simple statement and inauguration made by the ruler. It was written or marbles and placed in a particular area of the mountain. It is covered by a decent building as well. For tourists, the inscription looks boring perhaps. However, they can use it as the background of photography. Later, they can explore the mountain and learn the history behind it too! In terms of nuance, the site features weeds, small plants, and some trees. Not to mention the scenery is impressive!

Exploring Pamaton Inscription
Before reaching Pamaton Inscription which is owned by Indonesia, tourists need to conduct trekking. It indeed takes some time and effort but offers fun experience as well. For nature lovers, it becomes an interesting activity instead of boring one. Moreover, during the trip, they can see beautiful natural views that surround the mountain. They can also take the opportunity to take some pictures, in fact. It is indeed important to carry a camera to the site actually, as they may use it to take pictures of the inscription later.

Once arriving at the site, tourists may see the inscription right away. The condition remains good, so it is worth a photo shoot indeed. For first-timers, it is recommended to come with a local guide. This person may tell tourists about the history of the inscription and the story behind Pamaton Mountain, after all. It is said the mountain became one of the war grounds of Banjar during the colonial era back then. At the time, Major Koch of the Dutch performed a wide-scale attack to the fort of Pamaton Mountain. It happened in 1861. For the further story, tourists should rely on the guide.

Another interesting reason to visit Pamaton Inscription is to hear the urban legend. According to the rumor, the mountain itself has become the entrance to the ether world. Villagers named it Pamaton Kingdom Gate! Such mystical kingdom belongs to Lord Suryanata. It sounds thrilling, no?

How to Get There
For those coming from Martapura City in Indonesia, their first destination is Karang Intan Sub-District. Next, they should visit Kiram Village and conduct trekking to get to Pamaton Mountain. The whole trip may take around 45-60 minutes, as the distance is 23.8 km. As for the best route, it is none other than Mistar Cokrokusumo Street.