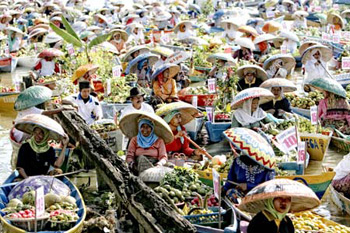 Mount Meratus divide South Kalimantan into two distinct regions. The southern part of the province is low land with rivers that runs through to the vast mangrove swamps along the coast and make Borneos' soil fertile. In South Kalimantan, you can enjoy nature tourism, include; many rivers, forests, lakes and mountains. Also its culture and heritage tourism like wide variety of art and culture.

There are many villages and residence buiil along Barito river by the native people of Banjar. Here you can enjoy the river culture in Banjarmasin as its own culture pattern. Most of of Banjarmasin people activities has done around river. That is why it's interesting to see the life of the city from the middle of the river. You can rent motor boats which are available on the river bank in order to begin the journey down the river past the withdrawal of a number of locations with a travel time of two to three hours. This is one of the most attractive tourist activity in the city and has a walk along the river and canal. In the suburban area, the river scenery still virgin and the visitors will take the journey along Martapura river and Barito river by Klotok boat and speedboat.

Beautiful traditional handicrafts made from local raw materials such as stone, gold, silver, brass, iron, and also various wood such as bamboo and rattan.The native people of South Kalimantan is Banjar tribes that essentially consists of sub-tribes, named; Maayan, Lawangan and Bukiat who get ethnic mixing with Malays, Javanese and Bugis. The main identity is the Banjar language as a common medium.